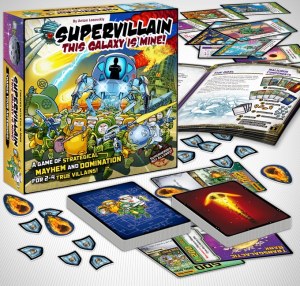 No more heroes any more.

Nobody knows where they’ve gone, but overnight the Galaxies Superheroes have all vanished; leaving the Supervillains free to squabble over the power vacuum. In Supervillain: The Galaxy is Mine you play one of these quarreling Supervillains and fight the others for dominance.

Supervillain: This Galaxy Is Mine! is an intense card strategy of galactic domination inspired by all sci-fi worlds put together and fueled with frenzied humor.

The project was funded in 5 hours and is unlocking one stretch after another.

The game states that Superheroes vanished. Now Villains are struggling for control over Galaxy. Each player takes on the role of a Villain. Those Villains build Secret Facilities to gain supreme powers. They launch Asteroids to bring chaos and destruction to planets of other Villains. And they use billions of devoted Minions — their construction force and invaluable resource for covert operations.

Each card in the game is unique and may be used in multiple ways, thus, allowing for infinite combinations. The game states that a player should outwit other Villains and gain enough Domination points to be proclaimed the Supervillain of the Galaxy.

Game philosophy is obviously based on the thoughts and deeds of the most famous Villains of all times. The Kickstarter page is covered with villainous quotes, more of this, each update starts with a new quote.

Supervillain: This Galaxy Is Mine! is from Moroz Publishing. The Kickstarter currently has 23 days left to go and is already at 420% funded.