The room is silent; there are four of us seated around the dining room table, we glance anxiously at each other; each clutching five similarly backed cards.

There is an awkward pause; we are all waiting for someone else to speak.

“Are you ready?” I ask, breaking the silence, uncertainty rich in my voice.  The other three nod, but I can see that they too are uneasy, they all know that pandemonium will follow shortly.

There is another pause, then to my right Mim grins.

“It’s coming,” she announces in a creepy sing-song voice, reminiscent of Carol-Anne from Poltergeist “Run!  10… 9… 8…”

Her counting continues, but it is drowned out by the chaos that has erupted all around her; we all start speaking frantically, each with their own demands.

“I need mutations! I need mutations!” Ross implores; his head lowered and his eyes clamped firmly shut; in his hand is one of his cards blindly thrust out in front of him. “Somebody give me a mutation!

“SAVE ME!” Ed loudly exclaims, his eyes filled with fear as he frantically looks from one player to the next. He too has a card in front of him, hoping that somebody will take it from him.

I understand Ed’s plight, but sadly I cannot assist, as much as I would like to.

I have my own problems.

“4… 3… 2…” Mim has not stopped counting; we frantically change cards before she finishes her count down. Doom has been narrowly averted. We each clutch a new card. After a second Ed looks around the rest of the table.

We are playing Escape the Nightmare, a cooperative real-time horror card game by Gregory Carslaw (the madman who brought us the excellent Wizard’s Academy and magnificent 404 Law Not Found) and I think…. I think… we are all having a great time. 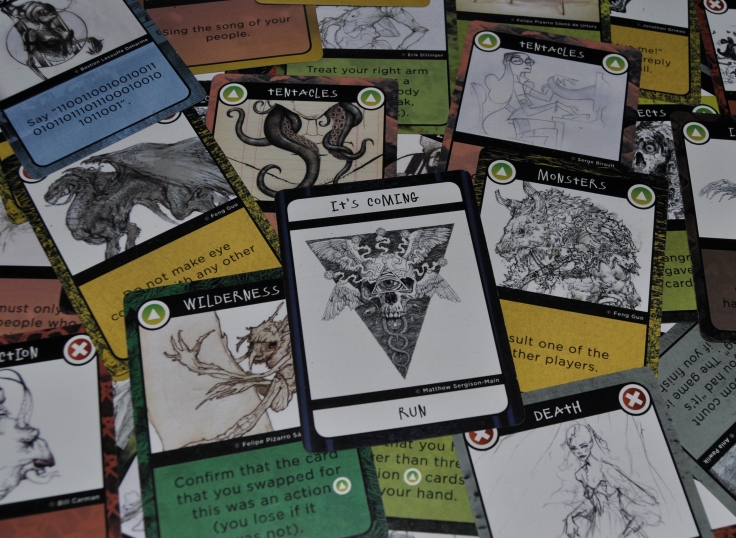 In Escape the Nightmare you play as a group of friends, all inhabiting a shared nightmare. If you think of horror films like A Nightmare on Elm Street¹ then you won’t go to far wrong.

Each player holds a hand of five cards, each detailing a nightmarish aspect of the dream. It is the goal of all of the players to ensure that just one of them manages to collect a set of four cards of the same suit in order for everybody to Escape the Nightmare.

But it’s not at all that simple; each card that you receive when trading forces you to undertake an action or places a restriction upon you. You might have to elaborately disagree with another player or you might only be able to talk by repeating things that another players says. With eleven suits, each containing four similarly themed cards; every game poses a different challenge to defeat.

To make matters worse there is something in here with you;chasing you through the nightmare.You will have to trade the “It’s Coming” card every ten seconds or be devoured.

Escape the Nightmare is a really fun little game that builds quickly tension and anxiety; every time we have played, each victory or defeat has been followed by some nervous laughter. It really does give you the same feeling of horror that you might get from a really good scary movie. With that in mind, I would not recommend Escape the Nightmare to be played by younger children, especially given that most of the art work is fairly mature in content².

I really do like Escape the Nightmare. It’s quick (taking no more than ten minutes to play) and easy to teach; so it’s an excellent game to act as break between longer game in a Games night.

8 out of 10 Creepy Blood Covered Meeples

1 – Especially Dream Warriors because it was one of the first positive examples of Dungeons and Dragons in a film. Okay the D&D geek did die³; but what do you expect?

2 – Not that I ever saw the artwork until I started reviewing the game; I was far too busy panicking when during play.

4 thoughts on “Escape the Nightmare”